What Does Rain Smell Like? by Clare Nassir and Simon King

Meteorologists Simon King and Clare Nasir reveal the captivating ways the weather works, from exploring incredible weather phenomenon (how are rainbows formed?), expertly breaking down our knowledge of the elements (could we harness the power of lightning?) to explaining the significance of weather in history (has the weather ever started a war?) and importantly discussing the future of weather (could climate modification save the planet?). 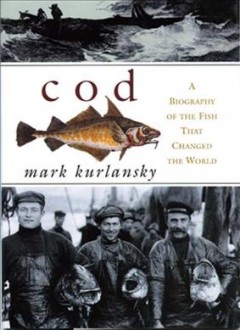 Cod: a Biography of the Fish that Changed the World by Mark Kurlansky

A history of the fish that has led to wars, stirred revolutions, sustained economies and diets, and helped in the settlement of North America features photographs, drawings, and recipes, as well as the natural history of this much sought after fish.

The Sound of a Wild Snail Eating: A Memoir by Elisabeth Tova Bailey

Bedridden and suffering from a neurological disorder, the author recounts the profound effect on her life caused by a gift of a snail in a potted plant and shares the lessons learned from her new companion about her the meaning of her life and the life of the small creature.

Eating the Sun: Small Musings on a Vast Universe by Ella Frances Sanders

Explores the principles, laws, and wonders of the universe, the solar system, the world, and daily life alongside these phenomena.

The Mosquito: a Human History of our Deadliest Predator by Timothy C. Winegard

Follows the history of the nefarious and pesky mosquito and its impact on humanity throughout the ages and around the globe, explaining how the tiny insect influenced the results of wars, colonization, and the modern world order.

The Soul of an Octopus: a Surprising Exploration into the Wonder of Consciousness by Sy Montgomery

Octopuses have varied personalities and intelligence they show in myriad ways: endless trickery to escape enclosures and get food; jetting water playfully to bounce objects like balls; and evading caretakers by using a scoop net as a trampoline and running around the floor on eight arms. But with a beak like a parrot, venom like a snake, and a tongue covered with teeth, how can such a being know anything? And what sort of thoughts could it think? The intelligence of dogs, birds, and chimpanzees was only recently accepted by scientists, who now are establishing the intelligence of the octopus, watching them solve problems and deciphering the meaning of their color-changing camouflage techniques.

The humor scientist behind Stiff: The Curious Lives of Human Cadavers and Spook: Science Tackles the Afterlife takes a tour of the human digestive system, explaining why the stomach doesn't digest itself and whether constipation can kill you.

The Book of Eels: Our Enduring Fascination with the Most Mysterious Creature in the Natural World by Patrik Svensson

Part H Is for Hawk, part The Soul of an Octopus, The Book of Eels is both a meditation on the world's most elusive fish—the eel—and a reflection on the human condition.

The Hidden Life of Trees: What They Feel, How They Communicate—Discoveries from A Secret World by Peter Wohlleben

Are trees social beings? In The Hidden Life of Trees forester and author Peter Wohlleben convincingly makes the case that, yes, the forest is a social network.  He draws on groundbreaking scientific discoveries to describe how trees are like human families: tree parents live together with their children, communicate with them, support them as they grow, share nutrients with those who are sick or struggling, and even warn each other of impending dangers.

The Secret Lives of Bats: My Adventures with the World's Most Misunderstood Mammals

Sharing highlights from a lifetime of adventure and discovery, Tuttle takes us to the frontiers of bat research to show that frog-eating bats can identify frogs by their calls, that some bats have social sophistication similar to that of higher primates, and that bats have remarkable memories. Bats also provide enormous benefits by eating crop pests, pollinating plants, and carrying seeds needed for reforestation. They save farmers billions of dollars annually and are essential to a healthy planet. Tuttle's account forever changes the way we see these poorly understood yet fascinating creatures.