Discover how some of our past American leaders have handled crises

If you love history like I do, you will find the Ken Burns series on the Roosevelts fascinating - "The Roosevelts - an Intimate History". Teddy, Franklin, and Eleanor - all related, well known, effective leaders and role models, and all different in their own way.  You will see how they shaped and were shaped by personal, national, and international crises.  This series is available from the library through the Kanopy streaming service or on DVD.

Want to learn more about architecture right from your own home?  The Chicago Architecture Center is offering virtual tours led by their expert docents.  Tours cover a variety of topics, including Chicago's Downtown Theatre District, Graceland Cemetery, and The Future of the Hospital. Check out the events here and start enjoying some local armchair travels! 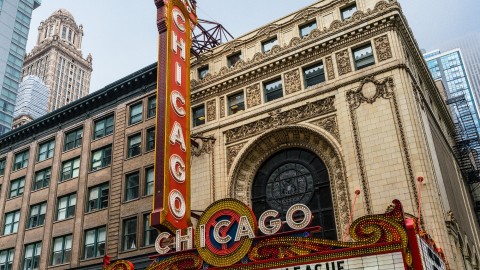 Stream indie films while you support the Wilmette Theatre!

There's a wealth of material available for online streaming these days, including independent films that might have been playing at the Wilmette Theatre were it not for “stay at home” circumstances. Now, you can watch virtual screenings of indie films at home, and a portion of your viewing fee will help support the Wilmette Theatre until they can reopen. Take a look at the theater's online programming schedule and don't forget that you can even enjoy their fresh movie popcorn from home.

The Festival includes feature films, shorts, documentaries, music, comedy, and panel discussions.  20 major film festivals from around the world are taking part in this 10 days of curated films streamed on YouTube for free.   Donations to the World Health Organization’s Covid-19 Solidarity Response Fund will be accepted.

And pick up your fresh popped popcorn at the Wilmette Theater!  "Takeout Popcorn is Back! For $10, you’ll get a yummy big ziplock of fresh movie popcorn! Equals two large size popcorn bags combined. Deliciously easy! So get your order in ‘cause supplies are limited, and this is too good to miss!http://ow.ly/IJM850zFGDE

When Emily St. John Mandel’s book Station Eleven came out, it quickly became my hot pick when a patron came in and asked if I had a recommendation for a “good book.”  I had them hooked from the get go, “it’s really a book about memory: family, relationships, love and how we move forward and connect in times of tragedy.  It’s a beautifully written story, and I love how just when you think Mandel is going to follow a predictable plot line, she flips the script, and it includes a travelling band of Shakespearian actors!”  Then, I’d start to lose them when I said, “it takes place after a plague... “ (patron’s eyes begin to widen and glaze over) “and it’s about how we regroup and reflect on our lives..” (me, beginning to talk really fast to keep their attention) “wait, it’s a gorgeous book and it’s not sad!”  Patron says, “is this science fiction?!”  Me: “yes, but it's sci-fi light! I promise! It’s really not that much sci-fi!” Annnnnd, I’ve lost you.

Science fiction gets such a bad rap in libraries to a general audience.  It has a reputation for going right to the “hard stuff” that we may collectively imagine, such as machines and far-out technology, space and interplanetary travel, cyborgs and the like.  Yes, while that is a portion of the genre, it encompasses so much more that deserves your attention and yes, maybe even your love.

A more exacting definition of science fiction is that it takes place in a world/space/time different than ours now.  It can indeed be on other planets or places, or it can be earth, and is typically a little further into the future, or maybe even in the past.  There usually has been a mass societal change and could have been brought about by some shift in the environment or technology.  Literaryterms.net uses a phrasing that I like, that it’s imaginative and based on science, but whoa doggie, science is huge!  It encompasses so much!  (Side note: You may have also heard of other similar genres such as speculative fiction, which can include magic or the supernatural, think of it as a subset of sci-fi.)

Science fiction runs the gamut of hardcore to the most softest of core, and I’d like to recommend some of the latter so that you may just turn into that person who attends that post-shelter-at-home party and can wow your friends with how awesome and smart you are because “oh yeah, I’ve read some sci-fi in my day, no big deal” as you cooly sip your cocktail or mocktail.

Here are some great science fiction titles to get you going*:

Life After Life by Kate Atkinson

The Passage by Justin Cronin

The Wanderers by Meg Howrey

The Farm by Joanne Ramos

You Have Never Been Here: New and Selected Stories by Mary Rickert

Ambiguity Machines and Other Stories by Vandana Singh

The Dreamers by Karen Thompson Walker

*Please note that many of these titles can fall into the subgenres of the sci-fi umbrella, which can include fantasy, speculative fiction, and dystopian fiction to name a few.