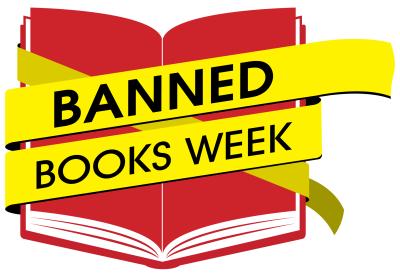 "Banned Books Week is an annual event celebrating the freedom to read. Banned Books Week was launched in 1982 in response to a sudden surge in the number of challenges to books in schools, bookstores and libraries. Typically held during the last week of September, it highlights the value of free and open access to information. Banned Books Week brings together the entire book community — librarians, booksellers, publishers, journalists, teachers, and readers of all types — in shared support of the freedom to seek and to express ideas, even those some consider unorthodox or unpopular." -bannedbooksweek.org

Books About Book Banning & the Freedom to Read:

"It's 1983 during South Korea's Fifth Republic, a military regime that has entrenched its power through censorship, torture, and the murder of protesters. In this charged political climate, a freshman named Kim Hyun Sook seeks refuge in the comfort of books. When the handsome young editor of the school newspaper invites her to his reading group, she expects to talk about Moby Dick, Hamlet, and The Scarlet Letter. Instead, she finds herself hiding in a basement as the youngest member of an underground banned book club. And as Hyun Sook soon discovers, in a totalitarian regime, the delights of discovering great works of illicit literature are quickly overshadowed by fear and violence. In Banned Book Club, Hyun Sook shares her dramatic true story of political strife, fear-mongering, the death of democratic institutions, and the relentless rebellion of reading." -From the Publisher

Burn This Book: PEN Writers Speak Out on the Power of the Word - edited by Toni Morrison

"As Americans we often take our freedom of speech for granted. When we talk about censorship we talk about China, the former Soviet Union, or the Middle East. But recent political developments—including the passage of the Patriot Act—have shined a spotlight on profound acts of censorship in our own backyard. Burn This Book features a sterling roster of award-winning writers offering their incisive, uncensored views on this most essential topic, including such revered literary heavyweights as Toni Morrison, Salman Rushdie, Orhan Pamuk, David Grossman, and Nadine Gordimer, among others." -From the Publisher

"Librarians present their stories of dealing with challenges to library materials. Their stories come from all types of libraries: school, academic, public, and special libraries." -From the Publisher

Read Dangerously: The Subversive Power of Literature in Troubled Times by Azar Nafisi

"What is the role of literature in an era when one political party wages continual war on writers and the press? What is the connection between political strife in our daily lives, and the way we meet our enemies on the page in fiction? How can literature, through its free exchange, affect politics? In this galvanizing guide to literature as resistance, Nafisi seeks to answer these questions. Drawing on her experiences as a woman and voracious reader living in the Islamic Republic of Iran, her life as an immigrant in the United States, and her role as literature professor in both countries, she crafts an argument for why, in a genuine democracy, we must engage with the enemy, and how literature can be a vehicle for doing so. Structured as a series of letters to her father, who taught her as a child about how literature can rescue us in times of trauma, Nafisi explores the most probing questions of our time through the works of Toni Morrison, Salman Rushdie, James Baldwin, Margaret Atwood, and more." -From the Publisher

The Trials of Portnoy: How Penguin Brought Down Australia’s Censorship System by Patrick Mullins

"Fifty years after the event, here is the first full account of an audacious publishing decision that with the help of booksellers and readers around the country, forced the end of literary censorship in Australia. For more than seventy years, a succession of politicians, judges, and government officials in Australia worked in the shadows to enforce one of the most pervasive and conservative regimes of censorship in the world. The goal was simple: to keep Australia free of the moral contamination of impure literature. Under the censorship regime, books that might damage the morals of the Australian public were banned, seized, and burned; bookstores were raided; publishers were fined; and writers were charged and even jailed. But in the 1970s, that all changed. In 1970, in great secrecy and at considerable risk, Penguin Books Australia resolved to publish Portnoy's Complaint, Philip Roth's frank, funny, and profane bestseller about a boy hung up about his mother and his penis. In doing so, Penguin spurred a direct confrontation with the censorship authorities, which culminated in criminal charges, police raids, and an unprecedented series of court trials across the country. Sweeping from the cabinet room to the courtroom, The Trials of Portnoy draws on archival records and new interviews to show how Penguin and a band of writers, booksellers, academics, and lawyers determinedly sought for Australians the freedom to read what they wished and how, in defeating the forces arrayed before them, they reshaped Australian literature and culture forever." -From the Publisher

Some Previously Banned or Challenged Books for Adults:

On Disobedience: Why Freedom Means Saying "No" to Power by Erich Fromm

"One of the great psychological and social philosophers of the twentieth century, Erich Fromm expounded on the importance of disobedience and the authentic voice of the individual in modern culture. As relevant now as when it was first published, On Disobedience is a collection of provocative essays, including the title entry, which suggests the very act of dissent—the choice to refuse to conform, to speak "no" to those in power—is essential to a humane society, both to ensure humankind's preservation and to allow for one person to reclaim a genuine sense of self." -From the Publisher

"With lyrical precision, psychological directness, resonating symbolic power, and a rage that is at once unrelenting and compassionate, Baldwin tells the story of the stepson of the minister of a storefront Pentecostal church in Harlem one Saturday in March of 1935. Originally published in 1953, Baldwin said of his first novel, 'Mountain is the book I had to write if I was ever going to write anything else."' -From the Publisher

"In 2014, Maia Kobabe, who uses e/em/eir pronouns, thought that a comic of reading statistics would be the last autobiographical comic e would ever write. At the time, it was the only thing e felt comfortable with strangers knowing about em. Now, Gender Queer is here. Maia's intensely cathartic autobiography charts eir journey of self-identity, which includes the mortification and confusion of adolescent crushes, grappling with how to come out to family and society, bonding with friends over erotic gay fanfiction, and facing the trauma and fundamental violation of pap smears. Started as a way to explain to eir family what it means to be nonbinary and asexual, Gender Queer is more than a personal story: it is a useful and touching guide on gender identity--what it means and how to think about it--for advocates, friends, and humans everywhere." -From the Publisher

"The unforgettable, heartbreaking story of the unlikely friendship between a wealthy boy and the son of his father’s servant, caught in the tragic sweep of history, The Kite Runner transports readers to Afghanistan at a tense and crucial moment of change and destruction. A powerful story of friendship, it is also about the power of reading, the price of betrayal, and the possibility of redemption; and an exploration of the power of fathers over sons—their love, their sacrifices, their lies." -From the Publisher

The Best We Could Do: An Illustrated Memoir by Thi Bui - Book | eBook

"An intimate look at one family's journey from their war-torn home in Vietnam to their new lives in America. Exploring the anguish of immigration and the lasting effects that displacement has on a child and her family, Bui documents the story of her family's daring escape after the fall of South Vietnam in the 1970s and the difficulties they faced building new lives for themselves. At the heart of Bui's story is a universal struggle: While adjusting to life as a first-time mother, she ultimately discovers what it means to be a parent." -From the Publisher

"Coates takes readers along on his journey through America's history of race and its contemporary resonances through a series of awakenings--moments when he discovered some new truth about our long, tangled history of race, whether through his myth-busting professors at Howard University, a trip to a Civil War battlefield with a rogue historian, a journey to Chicago's South Side to visit aging survivors of 20th century America's 'long war on black people, ' or a visit with the mother of a beloved friend who was shot down by the police." -From the Publisher

"Exquisite prose and wondrous storytelling have helped make Rudolfo Anaya the father of Chicano literature in English. Indeed, Anaya's tales fairly shimmer with the haunting beauty and richness of his culture. The winner of the Pen Center West Award for Fiction for his unforgettable novel Alburquerque, Anaya is perhaps best loved for his classic bestseller, Bless Me, Ultima... Antonio Marez is six years old when Ultima comes to stay with his family in New Mexico. She is a curandera, one who cures with herbs and magic. Under her wise wing, Tony will probe the family ties that bind and rend him, and he will discover himself in the magical secrets of the pagan past-a mythic legacy as palpable as the Catholicism of Latin America. And at each life turn there is Ultima, who delivered Tony into the world...and will nurture the birth of his soul." -From the Publisher

For more banned and challenged titles, come check out our display in the Recent Arrivals room at the library through the end of September. For more information on book challenges, visit https://bannedbooksweek.org/