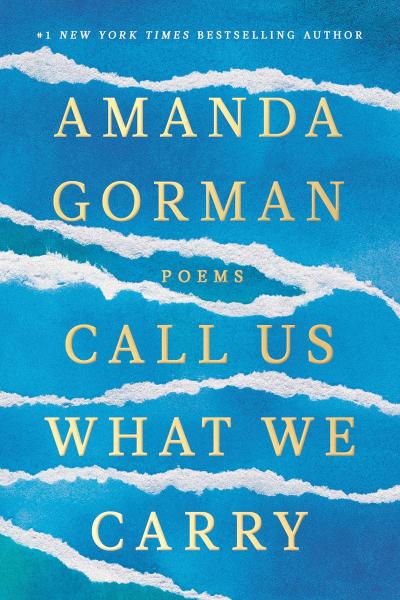 Call Us What We Carry: Poems by Amanda Gorman

"Homie is Danez Smith's magnificent anthem about the saving grace of friendship. Rooted in the loss of one of Smith's close friends, this book comes out of the search for joy and intimacy within a nation where both can seem scarce and getting scarcer. In poems of rare power and generosity, Smith acknowledges that in a country overrun by violence, xenophobia, and disparity, and in a body defined by race, queerness, and diagnosis, it can be hard to survive, even harder to remember reasons for living. But then the phone lights up, or a shout comes up to the window, and family - blood and chosen - arrives with just the right food and some redemption." -From the Publisher

"These poems consider the brevity and disposability of Black lives and other oppressed people in our current era of emboldened white supremacy, and the use of the Black vernacular in America’s vast reserve of racial and gendered epithets. Finna explores the erasure of peoples in the American narrative; asks how gendered language can provoke violence; and finally, how the Black vernacular, expands our notions of possibility, giving us a new language of hope." -From the Publisher

"From spoken word poet Jasmine Mans comes an unforgettable poetry collection about race, feminism, and queer identity. With echoes of Gwendolyn Brooks and Sonia Sanchez, Mans writes to call herself - and us - home. Each poem explores what it means to be a daughter of Newark, and America - and the painful, joyous path to adulthood as a young, queer Black woman." -From the Publisher

"In fierce, agile poems, Felon tells the story of the effects of incarceration―canvassing a wide range of emotions and experiences through homelessness, underemployment, love, drug abuse, domestic violence, fatherhood, and grace―and, in doing so, creates a travelogue for an imagined life. Reginald Dwayne Betts confronts the funk of post-incarceration existence in traditional and newfound forms, from revolutionary found poems created by redacting court documents to the astonishing crown of sonnets that serves as the volume’s radiant conclusion." -From the Publisher

"Prelude to Bruise is a song from a tightrope, balancing ecstatic existence and the chaos that always threatens to engulf a life on the margins. How do we reckon our past without being ravaged by it? How do we use people, their bodies, to express ourselves? Danger is everywhere in these poems, but never overwhelms them; the poet is always an anchor on the other side. And his story carries us relentlessly along." -From the Publisher

American Sonnets for My Past and Future Assassin by Terrance Hayes

"In seventy poems bearing the same title, Terrance Hayes explores the meanings of American, of assassin, and of love in the sonnet form. Written during the first two hundred days of the Trump presidency, these poems are haunted by the country's past and future eras and errors, its dreams and nightmares. Inventive, compassionate, hilarious, melancholy, and bewildered--the wonders of this new collection are irreducible and stunning." -From the Publisher

How to Carry Water: Selected Poems by Lucille Clifton

"These poems celebrating black womanhood and resilience shimmer with intellect, insight, humor, and joy, all in Clifton’s characteristic style―a voice that the late Toni Morrison described as “seductive with the simplicity of an atom, which is to say highly complex, explosive underneath an apparent quietude.” Selected and introduced by award-winning poet Aracelis Girmay, this volume of Clifton’s poetry is simultaneously timeless and fitting for today’s tumultuous moment." -From the Publisher

A Fortune for your Disaster: Poems by Hanif Abdurraqib

"In his much-anticipated follow-up to The Crown Ain't Worth Much, poet, essayist, biographer, and music critic Hanif Abdurraqib has written a book of poems about how one rebuilds oneself after a heartbreak, the kind that renders them a different version of themselves than the one they knew. It's a book about a mother's death, and admitting that Michael Jordan pushed off, about forgiveness, and how none of the author's black friends wanted to listen to "Don't Stop Believin'." It's about wrestling with histories, personal and shared. Abdurraqib uses touchstones from the world outside―from Marvin Gaye to Nikola Tesla to his neighbor's dogs―to create a mirror, inside of which every angle presents a new possibility." -From the Publisher

"Drawing from Jorge Luis Borges’ fascination with the library, Rollins uses the concept of the archive to offer a lyric history of the ways in which we process loss. “Memory is about the future, not the past,” she writes, and rather than shying away from the anger, anxiety, and mourning of her narrators, Rollins’ poetry seeks to challenge the status quo, engaging in a diverse, boundary-defying dialogue with an ever-present reminder of the ways race, sexuality, spirituality, violence, and American culture collide." -From the Publisher

"Layering joy and urgent defiance―against physical and cultural erasure, against white supremacy whether intangible or graven in stone―Trethewey’s work gives pedestal and witness to unsung icons. Monument, Trethewey’s first retrospective, draws together verse that delineates the stories of working class African American women, a mixed-race prostitute, one of the first black Civil War regiments, mestizo and mulatto figures in Casta paintings, and Gulf coast victims of Katrina. Through the collection, inlaid and inextricable, winds the poet’s own family history of trauma and loss, resilience and love." -From the Publisher

The Tradition by Jericho Brown

"Jericho Brown's daring new book The Tradition details the normalization of evil and its history at the intersection of the past and the personal. Brown's poetic concerns are both broad and intimate, and at their very core a distillation of the incredibly human: What is safety? Who is this nation? Where does freedom truly lie? Brown makes mythical pastorals to question the terrors to which we've become accustomed, and to celebrate how we survive. Poems of fatherhood, legacy, blackness, queerness, worship, and trauma are propelled into stunning clarity by Brown's mastery, and his invention of the duplex - a combination of the sonnet, the ghazal, and the blues - is testament to his formal skill. The Tradition is a cutting and necessary collection, relentless in its quest for survival while reveling in a celebration of contradiction." -From the Publisher