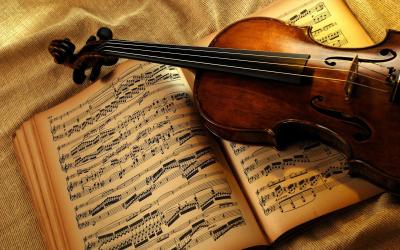 September is Classical Music Appreciation Month. Here are some of my absolute favorites. You can find more great albums and books featuring classical music on our display in the Recent Arrivals room.

"Joyce DiDonato's capacity for characterization is as astounding as the range and flexibility of her voice. This collection showcases her multifaceted art and the wealth of opportunities open to a mezzo-soprano by presenting her as different characters, both male and female, from the same opera story." -From the Publisher

Fortissimo: Backstage at the Opera with Sacred Monsters and Young Singers by William Murray (Book)

"H. L. Mencken declared that “the opera is to music what a bawdy house is to a cathedral.” It was not meant as a compliment, but to William Murray, former New Yorker staff writer and aspiring opera singer, a bawdy house is an apt metaphor for the opera: a place of confusion, high and low drama, fleshly pleasures and raucous song. In Fortissimo, Murray follows twelve young singers in the Lyric Opera of Chicago’s training program, the prestigious Opera Center for American Artists, through the 2003–2004 season. In the course of the year, these singers attend countless coaching sessions, inspiring master classes, nerve-racking auditions and grueling rehearsals—and finally perform with some of the most celebrated names (and spectacular egos) in opera, from Samuel Ramey to José Cura and Natalie Dessay. While chronicling their progress, Murray offers an insider’s look at the different aspects of the opera world that influence a young singer’s success, a world filled with temperamental maestros, ambitious directors, old-world tradition and sacred monsters." -From the Publisher

"A twenty-four lecture course that traces the development of the symphony from its roots in the opera of the Baroque period to the present."

Beauty of the Baroque by Danielle De Niese (CD)

"What most marks de Niese's singing throughout this program is a fresh, personal quality. The listener senses the force of vivid character traits, which can make a cantata sound operatic. Some ears might prefer more of an effortless, dulcet upper register to crystallize the spirituality in "Guardian angels, oh, protect me," from Handel's Trionfo del Tempo e del Disinganno, words sung by the allegorical figure of Beauty. What we hear here is more heated, a passionate yearning from an earthbound voice." -Opera News

"The British vocal ensemble VOCES8 is proud to inspire people through music and share the joy of singing. Touring globally, the group performs an extensive repertoire both in its a cappella concerts and in collaborations with leading orchestras, conductors and soloists. Versatility and a celebration of diverse musical expression are central to the ensemble's performance and education ethos." -Voces8 Website

Vespers of 1610 by Claudio Monteverdi (CD)

"The Vespro della Beata Vergine were written as a kind of demonstration piece: an example of what can be done setting texts in different styles, particularly the new theatrical style (the foundation of opera) of which Monteverdi was a great pioneer. Instead of hearing the flowing, closely knit counterpoint expected from a composer like Palestrina of the preceding generation, you hear something that's half opera and half dance. It's a marvelous mélange of styles." -NPR

This album has my two absolute favorite choral pieces by Whitacre - "When David Heard" and "Leonardo Dreams of His Flying Machine."

"Tosca tells the tragic story of three people – a famous opera singer, a free-thinking painter, and a sadistic chief of police – caught in a net of love and politics. Soprano Karita Mattila sings the title role for the first time outside her native Finland. Luc Bondy, acclaimed for his imaginative theater and opera productions, directs. The cast also includes Marcelo Álvarez as Cavaradossi and George Gagnidze as Scarpia. Joseph Colaneri conducts." -Metropolitan Opera

"It's 1781 and Antonio Salieri is the competent court composer to Emperor Joseph II. When Wolfgang Amadeus Mozart arrives at the court, Salieri is horrified to discover that the godlike musical gifts he desires himself have been bestowed on a bawdy, impish jokester. Mad with envy, he plots to destroy Mozart by any means, perhaps even murder."

This fictional biopic is hilarious, terrifying, and incredibly well done.