Get Your Veg On 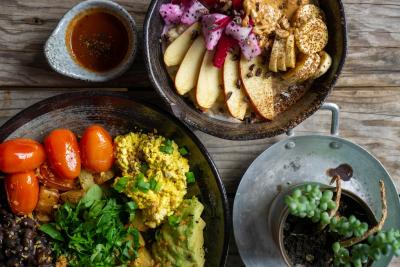 November is World Vegan Month. Give some vegan eats a try or learn about why people are vegan with some of my favorite books from the library:

"In her second book, Richa Hingle applies her culinary skills to international comfort foods. She delivers a wealth of flavor-packed "awesome sauces" and mix-and-match ideas to inspire you to create stunning meal combinations. These unique recipes have amazing depths of flavor, are easy to make, and have allergy-friendly options. Enjoy Richa's wow factor in sensational curries, comforting casseroles, and the next-generation of plant-based burgers, and more." -From the Publisher

"While living in France, Hannah pursued her passion for vegan cooking. Inspired by the food, culture, and burgeoning plant-based scene, her blog, Two Spoons, was born. In her debut cookbook, Hannah shares over 100 vegan dishes inspired by her time in France and nearby cultures. The Two Spoons Cookbook is a show-stopping blend of traditional recipes and trendy plant-based creations that reflect Hannah’s journey as a plant-based foodie in France, including everyday recipes that have made her blog so widely followed. The book also features menu ideas to create brunches, sweet assortments for an afternoon tea party, memorable dinners, and unforgettable charcuterie boards with colourful dips, spreads, finger foods, and fauxmages that all eaters will adore. Whether you are vegan or simply trying to incorporate more plants into your diet, this is a must-have cookbook from a rising food star in the plant-based community." -From the Publisher

"enné Claiborne grew up in Atlanta eating classic Soul Food—fluffy biscuits, smoky sausage, Nana's sweet potato pie—but thought she'd have to give all that up when she went vegan. As a chef, she instead spent years tweaking and experimenting to infuse plant-based, life-giving, glow-worthy foods with the flavor and depth that feeds the soul. In Sweet Potato Soul, Jenné revives the long tradition of using fresh, local ingredients creatively in dishes like Coconut Collard Salad and Fried Cauliflower Chicken. She improvises new flavors in Peach Date BBQ Jackfruit Sliders and Sweet Potato-Tahini Cookies. She celebrates the plant-based roots of the cuisine in Bootylicious Gumbo and savory-sweet Georgia Watermelon & Peach Salad. And she updates classics with Jalapeño Hush Puppies, and her favorite, Sweet Potato Cinnamon Rolls. Along the way, Jenné explores the narratives surrounding iconic and beloved soul food recipes, as well as their innate nutritional benefits—you've heard that dandelion, mustard, and turnip greens, okra, and black eyed peas are nutrition superstars, but here's how to make them super tasty, too." -From the Publisher

72 Reasons to Be Vegan: Why Plant-Based. Why Now. by Gene Stone and Kathy Freston

"Did you know that if you adopt a vegan diet you can enjoy better sex? Save money? Have glowing skin? You can ward off Alzheimer’s, Type 2 diabetes, rheumatoid arthritis, and other metabolic diseases. You can eat delicious burgers. Help save the planet. Join the cool kids, like Gandhi, Tolstoy, Leonardo—and Kyrie Irving, Kat Von D, and Joaquin Phoenix. Oh, and did we mention have better sex? (It’s about blood flow.) Those are just some of the 72 reasons we should all be vegan, as compiled and persuasively argued by Gene Stone and Kathy Freston, two of the leading voices in the ever-growing movement to eat a plant-based diet. While plenty of books tell you how to go vegan, 72 Reasons to Be Vegan is the book that tells you why. And it does so in a way that emphasizes not what you’d be giving up, but what you’d be gaining." -From the Publisher

"Joanne Lee Molinaro has captivated millions of fans with her powerfully moving personal tales of love, family, and food. In her debut cookbook, she shares a collection of her favorite Korean dishes, some traditional and some reimagined, as well as poignant narrative snapshots that have shaped her family history. As Joanne reveals, she’s often asked, “How can you be vegan and Korean?” Korean cooking is, after all, synonymous with fish sauce and barbecue. And although grilled meat is indeed prevalent in some Korean food, the ingredients that filled out bapsangs on Joanne’s table growing up—doenjang (fermented soybean paste), gochujang (chili sauce), dashima (seaweed), and more—are fully plant-based, unbelievably flavorful, and totally Korean. Some of the recipes come straight from her childhood: Jjajangmyun, the rich Korean-Chinese black bean noodles she ate on birthdays, or the humble Gamja Guk, a potato-and-leek soup her father makes. Some pay homage: Chocolate Sweet Potato Cake is an ode to the two foods that saved her mother’s life after she fled North Korea. The Korean Vegan Cookbook is a rich portrait of the immigrant experience with life lessons that are universal. It celebrates how deeply food and the ones we love shape our identity."

"Who knew vegetables could taste so good? Moskowitz and Romero's newest delicious collection makes it easier than ever to live vegan. You'll find more than 250 recipes--plus menus and stunning color photos--for dishes that will please every palate. All the recipes in Veganomicon have been thoroughly kitchen-tested to ensure user-friendliness and amazing results. And by popular demand, the Veganomicon includes meals for all occasions and soy-free, gluten-free, and low-fat options, plus quick recipes that make dinner a snap." -From the Publisher

"The 73 recipes showcased in Zen Vegan Food are incredibly beautiful and tasty, while also being nutritious, sustainable and ethically responsible. Color photos show the finished dishes, while comprehensive information on Japanese ingredients like seaweed, miso and tofu helps home cooks with shopping and preparation. Though we may not typically associate Buddhist monasteries with trendy chefs and temple cafes, a young generation of priests, like Iinuma, are ushering in a new era--one which emphasizes openness and a reconnection to the natural world. Buddhist monastery chefs have been creating delicious vegan dishes for centuries, and Zen Vegan Food offers a modern take full of fun and flavor. For anyone interested in sustainable, plant-based eating, this book will be a revelation--with new ways to prepare delicious meals the whole family will enjoy!" -From the Publisher

"From the farmers to the delivery trucks and everything in between, there are countless people and processes involved in getting meat and produce from where they're made to your kitchen. This recipe book highlights the difficulties and pleasures of eating sustainably! If you're looking for a way to combat climate change from your kitchen, this cookbook will help you with your goals. You may not think your food has anything to do with global warming, but in reality, the food industry has an undeniable impact on the environment and contributes one-fourth of our global greenhouse gas emissions. You can take a few small steps to help lower that number by introducing a low-carbon diet into your kitchen and life - and The Low-Carbon Cookbook will show you exactly how. Determining a food’s carbon cost can be difficult. From examining the impact of the supply chain for foods to evaluating the carbon footprint of various plant-based options, this cookbook shows you exactly how to make the most environmentally friendly food choices. Packed with over 140 delicious recipes made with sustainable ingredients, this climate-friendly cooking book will teach you how to calculate your footprint, reduce your meat and dairy intake, and eat seasonal and local." -From the Publisher