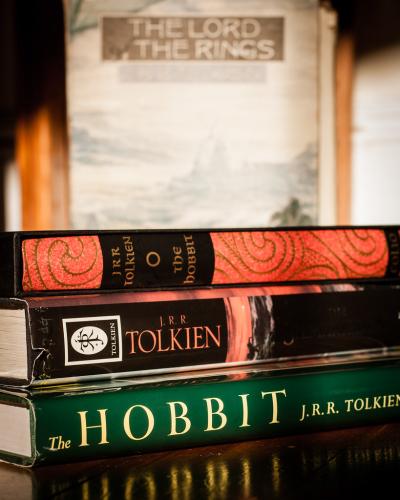 September 22nd is the birthday of both Bilbo and Frodo Baggins so it's known as Hobbit Day! Expand your understanding of Middle Earth & J.R.R. Tolkien with these titles:

Hobbit Virtues: Rediscovering Virtue Ethics Through J. R. R. Tolkien's The Hobbit and The Lord of the Rings by Christopher A. Snyder

"Tolkien’s works resonate with so many readers in part because Bilbo, Frodo, Sam, Merry, and Pippin demonstrate Classical, Judeo-Christian, Medieval, and even Hindu and Confucian virtues. Tolkien ennobles the small, the humble, and the marginalized in his Middle-earth writings and presents leaders who are hesitant to exercise power, are courteous, and value wisdom and learning. Each chapter in Hobbit Virtuesconsists of a wide-ranging discussion of a single virtue, exemplified by a character in Middle-earth, explaining its philosophical or theological roots and how the virtue is still relevant in a modern democracy. It will also include appendices where readers can find passages in Tolkien’s and Lewis’s works that discuss virtue ethics, and a glossary of virtues from ancient to modern, East to West. Tolkien’s readers come from many different religious and secular backgrounds and the pleasure and profundity of Hobbit Virtues is that mutual respect for public virtues is, especially now, necessary for a well-functioning pluralistic society." -From the Publisher

"When J.R.R. Tolkien wrote The Hobbit, he was already an accomplished amateur artist, and drew illustrations for his book while it was still in manuscript. The Hobbit as first printed had ten black-and-white pictures, two maps, and binding and dust jacket designs by its author. Later, Tolkien also painted five scenes for color plates, which comprise some of his best work. His illustrations for The Hobbit add an extra dimension to that remarkable book, and have long influenced how readers imagine Bilbo Baggins and his world. Written and edited by leading Tolkien experts Wayne G. Hammond and Christina Scull, The Art of The Hobbit by J.R.R. Tolkien showcases the complete artwork created by the author for his story—including related pictures, more than one hundred sketches, drawings, paintings, maps, and plans. Some of these images are published here for the first time, others for the first time in color, allowing Tolkien’s Hobbit pictures to be seen completely and more vividly than ever before." -From the Publisher

Tales From The Perilous Realm by J.R.R. Tolkien

"Never before published in a single volume, Tolkien’s four novellas (Farmer Giles of Ham, Leaf by Niggle, Smith of Wootton Major, and Roverandom) and one book of poems (The Adventures of Tom Bombadil) are gathered together for the first time, in a fully illustrated volume. This definitive collection of works -- which had appeared separately, in various formats, between 1949 and 1998 -- comes with a brand-new foreword and endmatter, and with a series of detailed pencil illustrations by Alan Lee, in the style of his other award-winning Tolkien work, most recently in The Children of Húrin. The book is the perfect opportunity for fans of Middle-earth to enjoy some of Tolkien’s often overlooked yet most creative storytelling. With dragons and sand sorcerers, sea monsters and hobbits, knights and dwarves, this collection contains all the classic elements for Tolkien buffs of all ages." -From the Publisher

"C. S. Lewis is the 20th century's most widely read Christian writer and J.R.R. Tolkien its most beloved mythmaker. For three decades, they and their closest associates formed a literary club known as the Inklings, which met every week in Lewis's Oxford rooms and in nearby pubs. They discussed literature, religion, and ideas; read aloud from works in progress; took philosophical rambles in woods and fields; gave one another companionship and criticism; and, in the process, rewrote the cultural history of modern times. In The Fellowship, Philip and Carol Zaleski offer the first complete rendering of the Inklings' lives and works. The result is an extraordinary account of the ideas, affections and vexations that drove the group's most significant members. C. S. Lewis accepts Jesus Christ while riding in the sidecar of his brother's motorcycle, maps the medieval and Renaissance mind, becomes a world-famous evangelist and moral satirist, and creates new forms of religiously attuned fiction while wrestling with personal crises. J.R.R. Tolkien transmutes an invented mythology into gripping story in The Lord of the Rings, while conducting groundbreaking Old English scholarship and elucidating, for family and friends, the Catholic teachings at the heart of his vision. Owen Barfield, a philosopher for whom language is the key to all mysteries, becomes Lewis's favorite sparring partner, and, for a time, Saul Bellow's chosen guru. And Charles Williams, poet, author of "supernatural shockers," and strange acolyte of romantic love, turns his everyday life into a mystical pageant. Romantics who scorned rebellion, fantasists who prized reality, wartime writers who believed in hope, Christians with cosmic reach, the Inklings sought to revitalize literature and faith in the twentieth century's darkest years-and did so in dazzling style." -From the Publisher

"Few settings in literature are as widely known or celebrated as J.R.R. Tolkien's Middle-Earth. The natural landscape plays a major role in nearly all of Tolkien's major works, and readers have come to view the geography of this fictional universe as integral to understanding and enjoying Tolkien's works. And in laying out this continent, Tolkien paid special attention to its plant life; in total, over 160 plants are explicitly mentioned and described as a part of Middle-Earth. Nearly all of these plants are real species, and many of the fictional plants are based on scientifically grounded botanic principles. In Flora of Middle Earth: Plants of Tolkien's Legendarium, botanist Walter Judd gives a detailed species account of every plant found in Tolkien's universe, complete with the etymology of the plant's name, a discussion of its significance within Tolkien's work, a description of the plant's distribution and ecology, and an original hand-drawn illustration by artist Graham Judd in the style of a woodcut print. Among the over three-thousand vascular plants Tolkien would have seen in the British Isles, the authors show why Tolkien may have selected certain plants for inclusion in his universe over others, in terms of their botanic properties and traditional uses. The clear, comprehensive alphabetical listing of each species, along with the visual identification key of the plant drawings, adds to the reader's understanding and appreciation of the Tolkien canon." -From the Publisher

A Hobbit, a Wardrobe, and a Great War: How J.R.R. Tolkien and C.S. Lewis Rediscovered Faith, Friendship, and Heroism in the Cataclysm of 1914-1918 by Joseph Loconte

"Had there been no Great War, there would have been no Hobbit, no Lord of the Rings, no Narnia, and perhaps no conversion to Christianity by C. S. Lewis. The First World War laid waste to a continent and brought about the end of innocence—and the end of faith. Unlike a generation of young writers who lost faith in the God of the Bible, however, J. R. R. Tolkien and C. S. Lewis found that the Great War deepened their spiritual quest. Both men served as soldiers on the Western Front, survived the trenches, and used the experience of that conflict to ignite their Christian imagination. Tolkien and Lewis produced epic stories infused with the themes of guilt and grace, sorrow and consolation. Giving an unabashedly Christian vision of hope in a world tortured by doubt and disillusionment, the two writers created works that changed the course of literature and shaped the faith of millions. This is the first book to explore their work in light of the spiritual crisis sparked by the conflict." -From the Publisher

"Though undoubtedly an academic, there was much more to J.R.R. Tolkien. He was ‘kidnapped’ as a baby in South Africa, orphaned, and mentally scarred from the bloody Battle of the Somme of World War I. His major book, The Lord of the Rings, one of the most popular and successful stories of our time, was expected by its doubting publisher to make a big loss. From ordinary places that inspired Tolkien, to imaginary creatures or settings, or from his world of scholarship to the faith that sustained him, wherever you go, you will be certain to find clues and insights that explore all aspects of the incredible Tolkien phenomenon. What is the connection between J.R.R. Tolkien and Bletchley Park? Did J.R.R. Tolkien predict the great storm of 1987?To which character in The Lord of the Rings did Tolkien compare himself? Does Sam Gamgee really bribe Gollum with fish and chips? How did C.S. Lewis write J.R.R. Tolkien’s obituary from beyond the grave? Find the answers to these and many other intriguing aspects of the man behind Middle-earth in this absorbing collection of stories and trivia!" -From the Publisher

"LIFE celebrates the 20th anniversary of the groundbreaking film adaptation of The Lord of the Rings with this deluxe collector’s edition. Learn the true story behind the pioneering novels The Hobbit, The Fellowship of the Ring, The Two Towers, and The Return of the King, all written by Oxford professor and WWI veteran J.R.R. Tolkien. Then go behind the scenes of all six of director Peter Jackson’s movies, with deep reporting and stunning images, from transporting vistas to epic battles. This gorgeous volume showcases the fantasy epic’s most-loved characters and the stars who brought them to life, including hobbits Frodo Baggins (Elijah Wood) and Samwise Gamgee (Sean Astin), valiant Aragorn (Viggo Mortensen), elves Legolas (Orlando Bloom) and Galadriel (Cate Blanchett), and sage wizard Gandalf (Ian McKellen). Learn how the filmmakers used revolutionary special effects to capture the unforgettable Gollum (Andy Serkis) and fearsome Smaug (Benedict Cumberbatch), and find out the secrets behind the breathtaking siege at Helm’s Deep, one of the most impressive action sequences ever committed to film. From the early animated adaptations of Tolkien’s novels to the upcoming Amazon TV series, the book touches it all." -From the Publisher