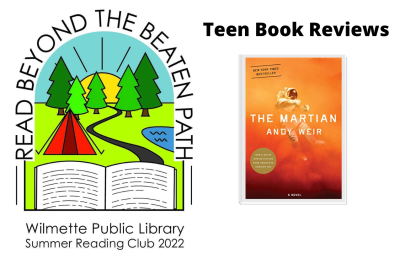 Enjoy this long-form review of The Martian, by Andy Weir, submitted by Olivia T.

Oh God, it's been a long while since I've written a review of a book, but I'll do my best!

The Martian was SUCH an invigorating read for me. Personally, I'm not really into science (I'm notoriously bad at the subject, much to my parents' chagrin), but this book /really/ got me. I'm not sure if it's the author's writing style (I picked up another one of his books recently, so we'll see) or just the plot and my inexplicable love for the movie, but there was something about this Sci-Fi book that just had me hooked the entire time.

The pacing was wonderful. I finished the novel in a day, and although there was conflict after conflict, the storyline never felt drawn out, nor did it feel boring at any point. Every character had a personality that I was easily able to fall in love with. It was a lovely tale about the trials and tribulations of getting someone home. I felt with and for the characters, and each page had me gripping the edge of my seat in fear for the main character. I literally could not put the book down until I knew he was safe at home.

I think another thing that I love about the writing style is the creative choice to make the book comedic. Of course, books that are grittier and darker are great to read too; the emotion that writers can create with their words are definitely impressive, and I do love myself a good depressing read every once in a while (yeah, that sounds terrible, but I'm sure you get what I mean). But I think that the choice to make the book into a lighter read, despite what was going on in the book, was a choice that really stuck with me. Not only did it constantly make me smile and just generally enjoy the book instead of making me feel solemn the entire time, it also provided for a good shock factor when something happy or funny happened, immediately followed by yet another conflict in the plot. I also just really liked how informal the whole thing sounded-- I was rooting for the main character a lot more because it felt like he was talking to a friend the entire time (I think his sense of humor was pretty impeccable, too; where else would I find someone who tells the government, "Look! A pair of boobs! --> (.)(.)"?)

Okay, one last thing before I wrap this up, because this is DEFINITELY way longer than it needs to be. The movie versus the book: I'll admit that this time around, I watched the movie before I read the book (I know, I know, a heinous crime indeed. Please forgive me for my transgressions). But, as always, I did love the book a whole lot more than the movie. Obviously, for time, a lot of things had to be cut out of the movie in order to condense it. I think the movie did a pretty good job of getting the overall plot across, but it just... it missed out on so much. I could definitely see which scenes were taken directly from the book, but there were so many scenes that I feel like should've made the final cut simply because it let us get to know the characters more. The book gives you insight into characters and relationship dynamics way more than the movie does. We're meant to assume in the movie that all the astronauts are close, and while it's definitely easy to believe, we aren't really given any proof to show that they're tight in the way that they'd risk their lives for just one astronaut. The only thing we're given that highlights their friendship is, like, a 3 minute exposition scene in the very beginning of the movie, and no one remembers that stuff. Of course we were rooting for Mark, but I think we /really/ root for him AND his team in the book because of how much more we get to know their characters.

Whoo! Okay, that was a lot, but hopefully you get the point: I really love this book. It's amazing, a 10/10, and definitely something I'd read again just to feel good, and honestly, a little giddy. A comfort book, if you will. Most reviews usually end with a recommendation of the book to specific audiences (at least, the ones in my school usually do), so I'll do that real quick just now. If you're into Sci-Fi or have watched the Martian movie, then I suggest reading it. It's a bit of a longer read (over 100k words), so unless you're ready to sit down for that, I don't recommend it as a short read. You don't even have to be a fan of Science Fiction to enjoy it, I think-- sure, it goes into a lot of science-y stuff, but the overall heart of the book is honestly about getting an abandoned astronaut home to Earth, and the sheer strength and intelligence of that abandoned astronaut. Some warnings would be a few mentions of suicide idealization, and a LOT of swearing. Overall, The Martian was an amazing novel that was such a joy to read with brilliant writing and characterization about one man getting home from 95 million miles away with the power of friendship. Oh, and science too, I guess.