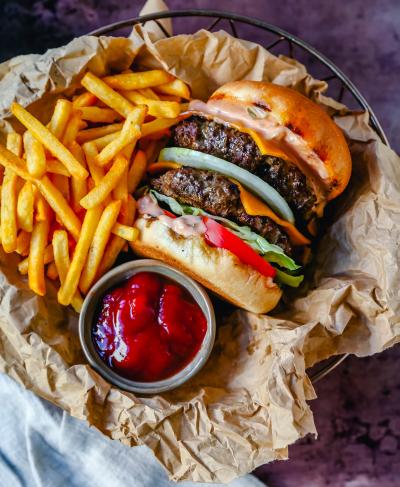 "Danny Meyer started Shake Shack with the idea of a hot dog cart in Madison Square Park, and donated 100% of their profits to the park as a "community wealth venture." Now they are Union Square Hospitality Group, offering food in unique environments with warmth and hospitality. Get an insider look at the Shake Shack community around the world-- and learn how to cook Shack-cago Dogs, ShackBurgers, and hand-spun shakes and concretes." -From the Publisher

Impossible(tm) the Cookbook: How to Save Our Planet, One Delicious Meal at a Time

"We've partnered with some of the world's best chefs, like Traci Des Jardins and Brad Farmerie, to bring you 40 delicious plant-based recipes, from Impossible Moroccan Cigars to Impossible Thai Basil Stir-Fry. Impossible Beef Made From Plants is made for all your favorite ground beef recipes, and we hope this collection will add even more to your list." -From the Impossible(tm) Website

"After a long day spent in one of his restaurants or taping a television show, what Bobby Flay craves more than anything else is … a crusty-on-the-outside, juicy-on-the-inside burger; a fistful of golden, crisp, salty fries; and a thick, icy milkshake. Given the grilling guru’s affinity for bold flavors and signature twists on American favorites, it’s no surprise that he has crafted the tastiest recipes ever for this ultimate food trio." -From the Publisher

"The Best Veggie Burgers on the Planet takes the popular veggie burger to the next level of freshness and flavor, with more than one hundred daringly delicious, internationally inspired vegan burgers—burgers that stack up to any patty around (meat-full or meat-free) and will wow not only your vegetarian and vegan friends, but all the skeptics too." -From the Publisher

"Whether you're an armchair traveler, a serious hamburger connoisseur, or a curious adventurer up for a road trip, Hamburger America will be your guide to reclaiming this precious slice of Americana. No other food says “America” like the hamburger, and documentary filmmaker George Motz has made it his personal mission to save our nation's unique burger identity. He has traveled across the country in search of the best burger joints - those that have survived outside the fast-food mainstream - and has documented their rich histories and one-of-a-kind taste experiences. This edition of the book includes George Motz's 1 hour documentary “Hamburger America” that profiles 8 burger joints across the USA." -From the Publisher

A Burger to Believe In: Recipes and Fundamentals by Chris Kronner

"Chris Kronner has dedicated his creative energy, professional skills, and a lifetime of burger experiences to understanding America's favorite sandwich. In his debut cookbook, this trusted chef reveals the secrets behind his art and obsession, and teaches you how to create all of the elements of a perfect burger at home. Including tips for sourcing and grinding high-quality meat, musings on what makes a good bun, creative ideas for toppings (spoiler alert: there are more bad ideas out there than good, and restraint is the name of the game), and more than forty burger accompaniments and alternatives—from superior onion rings to seasonal salads to Filet-O-Fish-inspired Crab Burgers—this book is not only a burger bible, but also a meditation on creating perfection in simplicity." -From the Publisher

The Burger King: Jim McLamore and the Building of an Empire by James W. McLamore

"A compelling look at an American original who helped usher in the fast-food era. The fascinating story of Jim McLamore, the cofounder of Burger King. Jim McLamore was a man of great integrity. He cared deeply about people and was a great motivator. He also believed it's critical to give back to your community. To me, that makes him a true leader and a great American-Dave Thomas, Founder and Senior Chairman, Wendy's International, Inc." -From the Publisher

"Tells the true story of how Ray Kroc, a salesman from Illinois, met Mac and Dick McDonald, who were running a burger operation in 1950s Southern California. Kroc was impressed by the brothers' speedy system of making the food and saw franchise potential. He maneuvered himself into a position to be able to pull the company from the brothers and create a billion-dollar empire." -From the Catalog