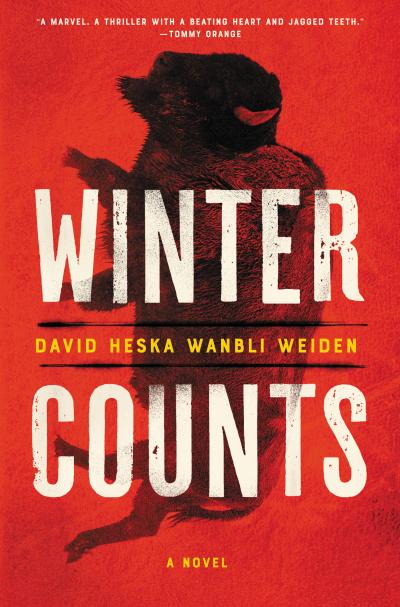 "Virgil Wounded Horse is the local enforcer on the Rosebud Indian Reservation in South Dakota. When justice is denied by the American legal system or the tribal council, Virgil is hired to deliver his own punishment, the kind that’s hard to forget. But when heroin makes its way into the reservation and finds Virgil’s own nephew, his vigilantism suddenly becomes personal. He enlists the help of his ex-girlfriend and sets out to learn where the drugs are coming from, and how to make them stop. They follow a lead to Denver and find that drug cartels are rapidly expanding and forming new and terrifying alliances. And back on the reservation, a new tribal council initiative raises uncomfortable questions about money and power. As Virgil starts to link the pieces together, he must face his own demons and reclaim his Native identity. He realizes that being a Native American in the 21st century comes at an incredible cost." -From the Publisher

Empire of Wild: A Novel by Cherie Dimaline

"Joan has been searching for her missing husband, Victor, for nearly a year - ever since that terrible night they’d had their first serious argument hours before he mysteriously vanished. Her Métis family has lived in their tightly knit rural community for generations, but no one keeps the old ways...until they have to. That moment has arrived for Joan. One morning, grieving and severely hungover, Joan hears a shocking sound coming from inside a revival tent in a gritty Walmart parking lot. It is the unmistakable voice of Victor. Drawn inside, she sees him. He has the same face, the same eyes, the same hands, though his hair is much shorter and he's wearing a suit. But he doesn't seem to recognize Joan at all. He insists his name is Eugene Wolff, and that he is a reverend whose mission is to spread the word of Jesus and grow His flock. Yet Joan suspects there is something dark and terrifying within this charismatic preacher who professes to be a man of God...something old and very dangerous. Joan turns to Ajean, an elderly foul-mouthed card shark who is one of the few among her community steeped in the traditions of her people and knowledgeable about their ancient enemies. With the help of the old Métis and her peculiar Johnny-Cash-loving, 12-year-old nephew Zeus, Joan must find a way to uncover the truth and remind Reverend Wolff who he really is...if he really is. Her life, and those of everyone she loves, depends upon it." -From the Publisher

Night of the Living Rez by Morgan Talty

"How do the living come back to life?  Set in a Native community in Maine, Night of the Living Rez is a riveting debut collection about what it means to be Penobscot in the twenty-first century and what it means to live, to survive, and to persevere after tragedy. In twelve striking, luminescent stories, author Morgan Talty—with searing humor, abiding compassion, and deep insight—breathes life into tales of family and community bonds as they struggle with a painful past and an uncertain future. A boy unearths a jar that holds an old curse, which sets into motion his family’s unraveling; a man, while trying to swindle some pot from a dealer, discovers a friend passed out in the woods, his hair frozen into the snow; a grandmother suffering from Alzheimer’s projects the past onto her grandson, and thinks he is her dead brother come back to life; and two friends, inspired by Antiques Roadshow, attempt to rob the tribal museum for valuable root clubs. In a collection that examines the consequences and merits of inheritance, Night of the Living Rez is an unforgettable portrayal of a Native community and marks the arrival of a standout talent in contemporary fiction." -From the Publisher

"Franklin Starlight is called to visit his father Eldon. He's 16 years old and has had the most fleeting of relationships with the man. The rare moments they've shared haunt and trouble Frank, but he answers the call, a son's duty to a father. He finds Eldon decimated after years of drinking, dying of liver failure in a small town flophouse. Eldon asks his son to take him into the mountains, so he may be buried in the traditional Ojibway manner. What ensues is a journey through the rugged and beautiful backcountry, and a journey into the past, as the two men push forward to Eldon's end. From a poverty-stricken childhood, to the Korean War, and later the derelict houses of mill towns, Eldon relates both the desolate moments of his life and a time of redemption and love and in doing so offers Frank a history he has never known, the father he has never had, and a connection to himself he never expected." -From the Publisher

There There by Tommy Orange

"As we learn the reasons that each person is attending the Big Oakland Powwow - some generous, some fearful, some joyful, some violent - momentum builds toward a shocking yet inevitable conclusion that changes everything. Jacquie Red Feather is newly sober and trying to make it back to the family she left behind in shame. Dene Oxendene is pulling his life back together after his uncle's death and has come to work at the powwow to honor his uncle's memory. Opal Viola Victoria Bear Shield has come to watch her nephew Orvil, who has taught himself traditional Indian dance through YouTube videos and will perform in public for the very first time. There will be glorious communion, and a spectacle of sacred tradition and pageantry. And there will be sacrifice, and heroism, and loss." -From the Publisher

The Removed: A Novel by Brandon Hobson

"In the fifteen years since their teenage son, Ray-Ray, was killed in a police shooting, the Echota family has been suspended in private grief. The mother, Maria, increasingly struggles to manage the onset of Alzheimer’s in her husband, Ernest. Their adult daughter, Sonja, leads a life of solitude, punctuated only by spells of dizzying romantic obsession. And their son, Edgar, fled home long ago, turning to drugs to mute his feelings of alienation. With the family’s annual bonfire approaching - an occasion marking both the Cherokee National Holiday and Ray-Ray’s death, and a rare moment in which they openly talk about his memory - Maria attempts to call the family together from their physical and emotional distances once more. But as the bonfire draws near, each of them feels a strange blurring of the boundary between normal life and the spirit world. Maria and Ernest take in a foster child who seems to almost miraculously keep Ernest’s mental fog at bay. Sonja becomes dangerously fixated on a man named Vin, despite - or perhaps because of - his ties to tragedy in her lifetime and lifetimes before. And in the wake of a suicide attempt, Edgar finds himself in the mysterious Darkening Land: a place between the living and the dead, where old atrocities echo." -From the Publisher

"Leslie Marmon Silko's sublime Ceremony is almost universally considered one of the finest novels ever written by an American Indian. It is the poetic, dreamlike tale of Tayo, a mixed-blood Laguna Pueblo and veteran of World War II. Tormented by shell shock and haunted by memories of his cousin who died in the war, Tayo struggles on his impoverished reservation. After turning to alcohol to ease his pain, he strives for a better understanding of who he is." -From the Publisher

The Only Good Indians by Stephen Graham Jones

"From New York Times best-selling author Stephen Graham Jones comes a novel that is equal parts psychological horror and cutting social commentary on identity politics and the American-Indian experience. Fans of Jordan Peele and Tommy Orange will love this story as it follows the lives of four American-Indian men and their families, all haunted by a disturbing, deadly event that took place in their youth. Years later, they find themselves tracked by an entity bent on revenge, totally helpless as the culture and traditions they left behind catch up to them in a violent, vengeful way." -From the Publisher

Love after the End: An Anthology of Two-Spirit and Indigiqueer Speculative Fiction edited by Joshua Whitehead

"This exciting and groundbreaking fiction anthology showcases a number of new and emerging 2SQ (Two-Spirit and queer Indigenous) writers from across Turtle Island. These visionary authors show how queer Indigenous communities can bloom and thrive through utopian narratives that detail the vivacity and strength of 2SQness throughout its plight in the maw of settler colonialism’s histories." -From the Publisher