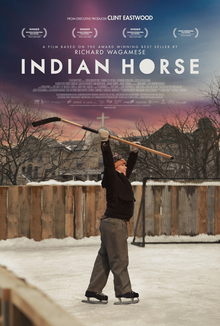 "After his father's suicide, Cufe, embarks on a journey outside of his reservation to find a more fulfilling life." -From the Catalog

"Saul Indian Horse, an Ojibway boy, is torn from his family and committed to a residential school. At the school, Saul is denied the freedom to speak his language or embrace his heritage and is a witness to abuse by the people sworn to protect him. But Saul finds salvation in the unlikeliest of places--the rink. His incredible hockey talents lead him away from the school to bigger and better opportunities, but no matter how far Saul goes, the ghosts of his past are always close behind." -From the Catalog

Rumble: The Indians Who Rocked the World (2017)

"This revelatory documentary brings to light the profound and overlooked influence of Indigenous people on popular music in North America. Focusing on music icons like Link Wray, Jimi Hendrix, Buffy Sainte-Marie, Taboo (The Black Eyed Peas), Charley Patton, Mildred Bailey, Jesse Ed Davis, Robbie Robertson, and Randy Castillo, RUMBLE: The Indians Who Rocked the World shows how these pioneering Native American musicians helped shape the soundtracks of our lives. The idea for RUMBLE came about when guitarist Stevie Salas, an Apache Indian and one of the film's Executive Producers, realized that no one outside of the music business knew about the profound contribution of these Native musicians. Renewed attention to this missing chapter in the history of American music led to the publishing of Brian Wright-McLeod's The Encyclopedia of Native Music, an exhibit at the Smithsonian National Museum of the American Indian, and eventually this documentary." -From the Catalog

"As teens on a Wisconsin reservation in the '80s, indigenous cousins Makwa and Teddo agreed to cover up a tragic homicide. Today, Makwa, or preferably "Michael," is an assimilated but inwardly raging executive, Teddo is a tormented ex-con ... and the ghosts of their shared past have them on a fateful collision course." -From the Catalog

"With an older brother in jail and living with their single mother on Pine Ridge Reservation, Johnny and his sister Jashuan's lives develop new challenges when their absentee cowboy father suddenly dies. The loss prompts Johnny to strike out for Los Angeles, but it would mean leaving behind his beloved sister." -From the Catalog

"Virgil First Raise wakes in a ditch on the hardscrabble plains of Montana. He stumbles home to his ranch on the reservation only to learn that his wife, Agnes, has left him. Worse, she's stolen his beloved rifle. Virgil sets out to find her, beginning an odyssey of inebriated intrigues with a mysterious "Airplane Man, " a beautiful barmaid, and two dangerous men in suits. His quixotic, modern-day vision quest moves Virgil ever closer to oblivion--until he discovers a long-hidden truth about his identity. But is it too late?" -From the Catalog

"Rutherford Falls is an idyllic small town until lifelong best friends Nathan Rutherford and Reagan Wells discover their quiet community sits on a powder keg of problems. When the mayor makes a simple proposal to move a crash-causing statue, she inadvertently initiates a crazy chain reaction of mayhem. The two friends suddenly find themselves clashing with a casino CEO, their town's cultural heritage, and one weird resident after another in this quirky comedy series from the creator of The Good Place & Parks and Recreation." -From the Catalog