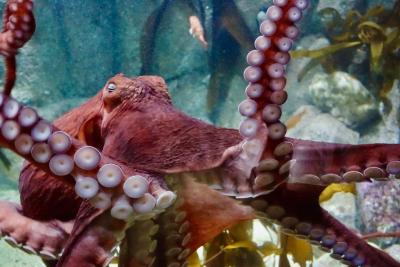 "Follow an Alaskan professor as he raises and studies an octopus in his home, making discoveries about its extraordinary intelligence, personality and skills. Octopuses are able to recognize faces and interact with other individuals." -From Kanopy

Octopus! The Most Mysterious Creature in the Sea by Katherine Harmon Courage

"Octopuses have been captivating humans for as long as we have been catching them. Yet for all of our ancient fascination and modern research, we still have not been able to get a firm grasp on these enigmatic creatures. Katherine Harmon Courage dives into the mystifying underwater world of the octopus and reports on her research around the world. She reveals, for instance, that the oldest known octopus lived before the first dinosaurs; that two thirds of an octopus’s brain capacity is spread throughout its arms, meaning each literally has a mind of its own; and that it can change colors within milliseconds to camouflage itself, yet appears to be colorblind." -From the Publisher

"Largely shell-less relatives of clams and snails, the marine mollusks in the class Cephalopoda—Greek for “head-foot”—are colorful creatures of many-armed dexterity, often inky self-defense, and highly evolved cognition. They are capable of learning, of retaining information—and of rapid decision-making to avoid predators and find prey. They have eyes and senses rivaling those of vertebrates like birds and fishes, they morph texture and body shape, and they change color faster than a chameleon. In short, they captivate us. From the long-armed mimic octopus—able to imitate the appearance of swimming flounders and soles—to the aptly named flamboyant cuttlefish, whose undulating waves of color rival the graphic displays of any LCD screen, there are more than seven hundred species of cephalopod. Featuring a selection of species profiles, Octopus, Squid, and Cuttlefish reveals the evolution, anatomy, life history, behaviors, and relationships of these spellbinding animals. Their existence proves that intelligence can develop in very different ways: not only are cephalopods unusually large-brained invertebrates, they also carry two-thirds of their neurons in their arms. A treasure trove of scientific fact and visual explanation, this worldwide illustrated guide to cephalopods offers a comprehensive review of these fascinating and mysterious underwater invertebrates—from the lone hunting of the octopus, to the social squid, and the prismatic skin signaling of the cuttlefish." -From the Publisher

The Soul of an Octopus: A Surprising Exploration into the Wonder of Consciousness by Sy Montgomery

"In pursuit of the wild, solitary, predatory octopus, popular naturalist Sy Montgomery has practiced true immersion journalism. From New England aquarium tanks to the reefs of French Polynesia and the Gulf of Mexico, she has befriended octopuses with strikingly different personalities—gentle Athena, assertive Octavia, curious Kali, and joyful Karma. Each creature shows her cleverness in myriad ways: escaping enclosures like an orangutan; jetting water to bounce balls; and endlessly tricking companions with multiple “sleights of hand” to get food. Scientists have only recently accepted the intelligence of dogs, birds, and chimpanzees but now are watching octopuses solve problems and are trying to decipher the meaning of the animal’s color-changing techniques. With her “joyful passion for these intelligent and fascinating creatures” (Library Journal Editors’ Spring Pick), Montgomery chronicles the growing appreciation of this mollusk as she tells a unique love story. By turns funny, entertaining, touching, and profound, The Soul of an Octopus reveals what octopuses can teach us about the meeting of two very different minds." -From the Publisher

Other Minds: The Octopus, the Sea, and the Deep Origins of Consciousness by Peter Godfrey-Smith

"Although mammals and birds are widely regarded as the smartest creatures on earth, it has lately become clear that a very distant branch of the tree of life has also sprouted higher intelligence: the cephalopods, consisting of the squid, the cuttlefish, and above all the octopus. In captivity, octopuses have been known to identify individual human keepers, raid neighboring tanks for food, turn off lightbulbs by spouting jets of water, plug drains, and make daring escapes. How is it that a creature with such gifts evolved through an evolutionary lineage so radically distant from our own? What does it mean that evolution built minds not once but at least twice? The octopus is the closest we will come to meeting an intelligent alien. What can we learn from the encounter?" -From the Publisher

"raig Foster and Ross Frylinck regularly dive together in the awe-inspiring kelp forests off South Africa, without wetsuits or oxygen tanks. Craig had dived this way for years, including alongside the octopus that inspired My Octopus Teacher. In Ross, he found a kindred spirit, someone who also embraced the ancient methods of acclimating his body to frigid waters, but whose eyes had not yet adjusted to the transcendent wonder Craig saw each time they dove. In the heart-wrenching stories that make up this unforgettable book, we swim alongside Ross as he grows from skeptic to student of the underwater wild. And in the revelatory marine science behind the stunning photos, we learn how to track sea hares, cuttlefish, and limpets, and we witness strange new behaviors never before documented in marine biology. We realize that a whole world of wonder, and an innate wildness within us all, emerge anew when we simply observe." -From the Publisher

"After Tova Sullivan’s husband died, she began working the night shift at the Sowell Bay Aquarium, mopping floors and tidying up. Keeping busy has always helped her cope, which she’s been doing since her eighteen-year-old son, Erik, mysteriously vanished on a boat in Puget Sound over thirty years ago. Tova becomes acquainted with curmudgeonly Marcellus, a giant Pacific octopus living at the aquarium. Marcellus knows more than anyone can imagine but wouldn’t dream of lifting one of his eight arms for his human captors—until he forms a remarkable friendship with Tova. Ever the detective, Marcellus deduces what happened the night Tova’s son disappeared. And now Marcellus must use every trick his old invertebrate body can muster to unearth the truth for her before it’s too late. Shelby Van Pelt’s debut novel is a gentle reminder that sometimes taking a hard look at the past can help uncover a future that once felt impossible." -From the Publisher