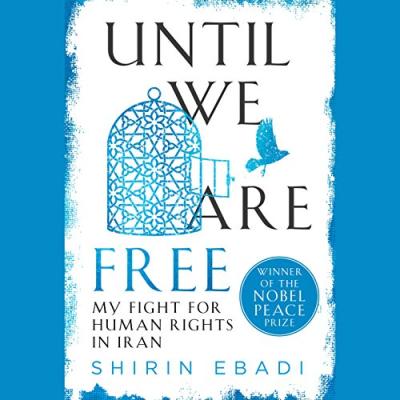 My Prison, My Home: One Woman's Story of Captivity in Iran by Haleh Esfandiari

"My Prison, My Home is the harrowing true story of Iranian-American scholar Haleh Esfandiari’s arrest on false charges and subsequent incarceration in Evin Prison, the most notorious penitentiary in Ahmadinejad’s Iran. Esfandiari’s riveting, deeply personal, and illuminating first-person account of her ordealis the inspiring tale of one woman’s triumph over interrogation, intimidation, and fear." -From the Publisher

The Wind in My Hair: My Fight for Freedom in Modern Iran by Masih Alinejad

"A photo on Masih's Facebook page: a woman standing proudly, face bare, hair blowing in the wind. Her crime: removing her veil, or hijab, which is compulsory for women in Iran. This is the self-portrait that sparked 'My Stealthy Freedom,' a social media campaign that went viral. But Masih is so much more than the arresting face that sparked a campaign inspiring women to find their voices. She's also a world-class journalist whose personal story, told in her unforgettably bold and spirited voice, is emotional and inspiring. She grew up in a traditional village where her mother, a tailor and respected figure in the community, was the exception to the rule in a culture where women reside in their husbands' shadows.  As a teenager, Masih was arrested for political activism and was surprised to discover she was pregnant while in police custody. When she was released, she married quickly and followed her young husband to Tehran where she was later served divorce papers to the shame and embarrassment of her religiously conservative family. Masih spent nine years struggling to regain custody of her beloved only son and was forced into exile, leaving her homeland and her heritage. Following Donald Trump's notorious immigration ban, Masih found herself separated from her child, who lives abroad, once again. A testament to a spirit that remains unbroken, and an enlightening, intimate invitation into a world we don't know nearly enough about, The Wind in My Hair is the extraordinary memoir of a woman who overcame enormous adversity to fight for what she believes in, and to encourage others to do the same." -From the Publisher

Until We Are Free: My Fight for Human Rights in Iran by Shirin Ebadi

"The first Muslim woman to receive the Nobel Peace Prize, Shirin Ebadi has inspired millions around the globe through her work as a human rights lawyer defending women and children against a brutal regime in Iran. Now Ebadi tells her story of courage and defiance in the face of a government out to destroy her, her family, and her mission: to bring justice to the people and the country she loves. For years the Islamic Republic tried to intimidate Ebadi, but after Mahmoud Ahmadinejad rose to power in 2005, the censorship and persecution intensified. The government wiretapped Ebadi’s phones, bugged her law firm, sent spies to follow her, harassed her colleagues, detained her daughter, and arrested her sister on trumped-up charges. It shut down her lectures, fired up mobs to attack her home, seized her offices, and nailed a death threat to her front door. Despite finding herself living under circumstances reminiscent of a spy novel, nothing could keep Ebadi from speaking out and standing up for human dignity. But it was not until she received a phone call from her distraught husband—and he made a shocking confession that would all but destroy her family—that she realized what the intelligence apparatus was capable of to silence its critics. The Iranian government would end up taking everything from Shirin Ebadi—her marriage, friends, and colleagues, her home, her legal career, even her Nobel Prize—but the one thing it could never steal was her spirit to fight for justice and a better future. This is the amazing, at times harrowing, simply astonishing story of a woman who would never give up, no matter the risks. Just as her words and deeds have inspired a nation, Until We Are Free will inspire you to find the courage to stand up for your beliefs." -From the Publisher

Between Two Worlds: My Life and Captivity in Iran by Roxana Saberi

"Between Two Worlds is the harrowing chronicle of Iranian-American journalist Roxana Saberi’s imprisonment in Iran—as well as a penetrating look at Iran and its political tensions. Here for the first time is the full story of Saberi’s arrest and imprisonment, which drew international attention as a cause célèbre from Barack Obama, Hillary Clinton, and leaders across the globe." -From the Publisher

"For many years, heartache prevented Nahid Rachlin from turning her sharp novelist's eye inward: to tell the story of how her own life diverged from that of her closest confidante and beloved sister, Pari. Growing up in Iran, both refused to accept traditional Muslim mores, and dreamed of careers in literature and on the stage. Their lives changed abruptly when Pari was coerced by their father into marrying a wealthy and cruel suitor. Nahid narrowly avoided a similar fate, and instead negotiated with him to pursue her studies in America. When Nahid received the unsettling and mysterious news that Pari had died after falling down a flight of stairs, she traveled back to Iran--now under the Islamic regime--to find out what happened to her truest friend, confront her past, and evaluate what the future holds for the heartbroken in a tale of crushing sorrow, sisterhood, and ultimately, hope." -From the Publisher

Iran Awakening: One Woman's Journey to Reclaim Her Life and Country by Shirin Ebadi

"Best known in this country as the lawyer working tirelessly on behalf of Canadian photojournalist, Zara Kazemi—raped, tortured and murdered in Iran—Dr. Ebadi offers us a vivid picture of the struggles of one woman against the system. The book movingly chronicles her childhood in a loving, untraditional family, her upbringing before the Revolution in 1979 that toppled the Shah, her marriage and her religious faith, as well as her life as a mother and lawyer battling an oppressive regime in the courts while bringing up her girls at home. Outspoken, controversial, Shirin Ebadi is one of the most fascinating women today. She rose quickly to become the first female judge in the country; but when the religious authorities declared women unfit to serve as judges she was demoted to clerk in the courtroom she had once presided over. She eventually fought her way back as a human rights lawyer, defending women and children in politically charged cases that most lawyers were afraid to represent. She has been arrested and been the target of assassination, but through it all has spoken out with quiet bravery on behalf of the victims of injustice and discrimination and become a powerful voice for change, almost universally embraced as a hero. Her memoir is a gripping story—a must-read for anyone interested in Zara Kazemi’s case, in the life of a remarkable woman, or in understanding the political and religious upheaval in our world." -From the Publisher

"Marzieh, a terminally ill actress, relates her quest for political asylum. As Marzieh narrates her experiences, she recounts her struggle to work as an actress under Iran's oppressive regime. Set against the backdrop of Tehran's thriving arts culture, Moussavi's film registers the trials of a modern woman in a chaotic political environment."  -From Hoopla

"In the courts and on the streets, Nasrin has long fought for the rights of women, children, LGBTQ, religious minorities, journalists, artists, and those facing the death penalty. She was arrested in June 2018 and sentenced to 38 years in prison, plus 148 lashes. Even from prison, she has continued to challenge the authorities. Narrated by Academy Award-winner Olivia Colman and secretly filmed by women and men who risked arrest, the film features acclaimed filmmaker Jafar Panahi, Nobel Peace Prize laureate Shirin Ebadi, journalist Ann Curry, exiled women's rights activist Mansoureh Shojaee, and Nasrin's equally courageous husband Reza Khandan." -From Hoopla