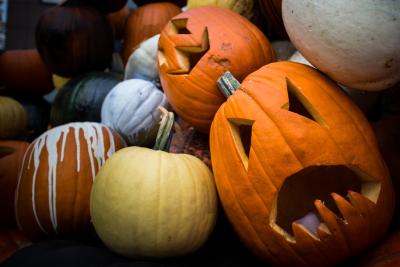 In honor of spooky season, here are some of my favorite creepy books. Reader beware: some of these are not for the easily spooked.

For more titles, check out our Thrills and Chills display near the Recent Arrivals for the rest of the month!

"'Come home.' Vera’s mother called and Vera obeyed. In spite of their long estrangement, in spite of the memories—she's come back to the home of a serial killer. Back to face the love she had for her father and the bodies he buried there, beneath the house he'd built for his family. Coming home is hard enough for Vera, and to make things worse, she and her mother aren’t alone. A parasitic artist has moved into the guest house out back and is slowly stripping Vera’s childhood for spare parts. He insists that he isn’t the one leaving notes around the house in her father’s handwriting… but who else could it possibly be? There are secrets yet undiscovered in the foundations of the notorious Crowder House. Vera must face them and find out for herself just how deep the rot goes." -From the Publisher

Lakewood: A Novel by Megan Giddings

"When Lena Johnson’s beloved grandmother dies, and the full extent of the family debt is revealed, the black millennial drops out of college to support her family and takes a job in the mysterious and remote town of Lakewood, Michigan. On paper, her new job is too good to be true. High paying. No out of pocket medical expenses. A free place to live. All Lena has to do is participate in a secret program—and lie to her friends and family about the research being done in Lakewood. An eye drop that makes brown eyes blue, a medication that could be a cure for dementia, golden pills promised to make all bad thoughts go away. The discoveries made in Lakewood, Lena is told, will change the world—but the consequences for the subjects involved could be devastating. As the truths of the program reveal themselves, Lena learns how much she’s willing to sacrifice for the sake of her family." -From the Publisher

What Moves the Dead by T. Kingfisher

"When Alex Easton, a retired soldier, receives word that their childhood friend Madeline Usher is dying, they race to the ancestral home of the Ushers in the remote countryside of Ruritania. What they find there is a nightmare of fungal growths and possessed wildlife, surrounding a dark, pulsing lake. Madeline sleepwalks and speaks in strange voices at night, and her brother Roderick is consumed with a mysterious malady of the nerves. Aided by a redoubtable British mycologist and a baffled American doctor, Alex must unravel the secret of the House of Usher before it consumes them all." -From the Publisher

"Stephen King returns to the characters and territory of one of his most popular novels ever, The Shining, in this instantly riveting novel about the now middle-aged Dan Torrance (the boy protagonist of The Shining) and the very special 12-year-old girl he must save from a tribe of murderous paranormals. On highways across America, a tribe of people called The True Knot travel in search of sustenance. They look harmless - mostly old, lots of polyester, and married to their RVs. But as Dan Torrance knows, and spunky 12-year-old Abra Stone learns, The True Knot are quasi-immortal, living off the "steam" that children with the "shining" produce when they are slowly tortured to death. Haunted by the inhabitants of the Overlook Hotel where he spent one horrific childhood year, Dan has been drifting for decades, desperate to shed his father's legacy of despair, alcoholism, and violence. Finally, he settles in a New Hampshire town, an AA community that sustains him, and a job at a nursing home where his remnant "shining" power provides the crucial final comfort to the dying. Aided by a prescient cat, he becomes "Doctor Sleep." Then Dan meets the evanescent Abra Stone, and it is her spectacular gift, the brightest shining ever seen, that reignites Dan's own demons and summons him to a battle for Abra's soul and survival. This is an epic war between good and evil, a gory, glorious story that will thrill the millions of hyper-devoted fans of The Shining and wildly satisfy anyone new to the territory of this icon in the King canon." -From the Publisher

"A young woman named Amanda lies dying in a rural hospital clinic. A boy named David sits beside her. She’s not his mother. He's not her child. Together, they tell a haunting story of broken souls, toxins, and the power and desperation of family. Fever Dream is a nightmare come to life, a ghost story for the real world, a love story and a cautionary tale. One of the freshest new voices to come out of the Spanish language and translated into English for the first time, Samanta Schweblin creates an aura of strange psychological menace and otherworldly reality in this absorbing, unsettling, taut novel." -From the Publisher

"Keisha Taylor lived a quiet life with her wife, Alice, until the day that Alice disappeared. After months of searching, presuming she was dead, Keisha held a funeral, mourned, and gradually tried to get on with her life. But that was before Keisha started to see her wife, again and again, in the background of news reports from all over America. Alice isn’t dead, and she is showing up at every major tragedy and accident in the country. Following a line of clues, Keisha takes a job as a long-haul truck driver and begins searching for Alice. She eventually stumbles on an otherworldly conflict being waged in the quiet corners of our nation’s highway system—uncovering a conspiracy that goes way beyond one missing woman." -From the Publisher

"Area X-a remote and lush terrain-has been cut off from the rest of the continent for decades. Nature has reclaimed the last vestiges of human civilization. The first expedition returned with reports of a pristine, Edenic landscape; all the members of the second expedition committed suicide; the third expedition died in a hail of gunfire as its members turned on one another; the members of the eleventh expedition returned as shadows of their former selves, and within months of their return, all had died of aggressive cancer. This is the twelfth expedition. Their group is made up of four women: an anthropologist; a surveyor; a psychologist, the de facto leader; and our narrator, a biologist. Their mission is to map the terrain and collect specimens; to record all their observations, scientific and otherwise, of their surroundings and of one another; and, above all, to avoid being contaminated by Area X itself. They arrive expecting the unexpected, and Area X delivers-they discover a massive topographic anomaly and life forms that surpass understanding-but it's the surprises that came across the border with them, and the secrets the expedition members are keeping from one another, that change everything." -From the Publisher

A Choir of Ill Children by Tom Piccirilli

"Since his mother’s disappearance and his father’s suicide, Thomas has cared for his three brothers—conjoined triplets with separate bodies but one shared brain—and the town’s only industry, the Mill. Because of his family’s prominence, Thomas is feared and respected by the superstitious swamp folk. Granny witches cast hexes while Thomas’s childhood sweetheart drifts through his life like a vengeful ghost and his best friend, a reverend suffering from the power of tongues, is overcome with this curse as he tries to warn of impending menace. All Thomas learns is that “the carnival is coming.” Torn by responsibility and rage, Thomas must face his tormented past as well as the mysterious forces surging toward the town he loves and despises." -From the Publisher

Witches of Lychford by Paul Cornell

"The villagers in the sleepy hamlet of Lychford are divided. A supermarket wants to build a major branch on their border. Some welcome the employment opportunities, while some object to the modernization of the local environment. Judith Mawson (local crank) knows the truth -- that Lychford lies on the boundary between two worlds, and that the destruction of the border will open wide the gateways to malevolent beings beyond imagination. But if she is to have her voice heard, she's going to need the assistance of some unlikely allies..." -From the Publisher

"Twelve six-year-olds and their three adult chaperones head into the woods on a camping trip. None of them make it out alive." -From the Publisher

My Annihilation by Fuminori Nakamura (translated by Sam Bett)

"A confessional diary implicates its reader in a heinous crime, and reveals with disturbing honesty the psychological motives of a killer. With My Annihilation, Fuminori Nakamura, master of literary noir, has constructed a puzzle-box of a narrative that delves relentlessly into the darkest corners of human consciousness, that interrogates the unspeakable thoughts that all humans share and that only monsters act on." -From the Publisher

"Something is out there....Something terrifying that must not be seen. One glimpse and a person is driven to deadly violence. No one knows what it is or where it came from. Five years after it began, a handful of scattered survivors remain, including Malorie and her two young children. Living in an abandoned house near the river, Malorie has long dreamed of fleeing to a place where her family might be safe. But the journey ahead will be terrifying: 20 miles downriver in a rowboat blindfolded with nothing to rely on but Malorie's wits and the children's trained ears. One wrong choice and they will die. And something is following them. But is it man, animal, or monster?" -From the Publisher

Tender is the Flesh by Agustina Bazterrica (translated by Sarah Moses)

"If everyone was eating human meat, would you? Marcos is in the business of slaughtering humans - only no one calls them that. He works with numbers, consignments, processing. One day, he's given a specimen of the finest quality. He leaves her tied up in an outhouse, a problem to be disposed of later. But she haunts Marcos. Her trembling body, and watchful gaze, seem to understand. And soon, he becomes tortured by what has been lost - and what might still be saved..." -From the Publisher