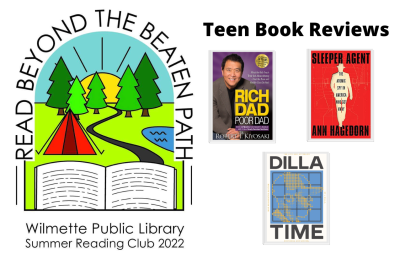 Rich Dad, Poor Dad: What the Rich Teach Their Kids About Money that the Poor and Middle Class Do Not, by Robert Kiyosaki

My dad gave me his copy of Rich Dad, Poor Dad and asked me to read it this summer. He said it really helped him to work smarter and not harder. He also told me that the book was very influential when he started his own business. My dad reads a ton of books and the fact that he recommended this one to me means he must really like it. I liked it too and learned a lot of how to be financially smart or at least smarter.

Sleeper Agent: The Atomic Spy in America Who Got Away, by Ann Hagedorn

I think the sleeper agent book is really good on a few traits. First is that it gives you an active desire to read the book and want to know what happens. This kind of thing is something that I have found separates what are the equivalent of research papers engaging to those who want to learn from the books that make you want to learn. Second is the pacing it made it such that I never felt bored or like information was to quick to come. I had the right speed for me to read and understand everything that was being communicated, but wasn't bored.

Dilla Time: The Life and Afterlife of J Dilla, the Hip-Hop Producer Who Reinvented Rhythm, by Dan Charnas

It starts with the young James Dewitt Yancey growing up in Detroit and how he grew up having a love of music, from dancing as a baby to James Brown and playing as a drummer to picking out his own vinyl records. He then had a dream of being a famous hiphop artist, and although he was very good at what he did, his mom didn’t think he could go far with it so she signed him up for an aero plane academy so he could have a guaranteed job as a pilot. He didn’t want this and forced his way back into regular school where he made many connections he would have for a long time, and soon started working with some producers that taught him how to make beats. He started chopping up samples and became obsessed with it, spending all day working in it nonstop. Eventually he made enough connections where he and 2 rappers, T3 and Baatin, formed the group slum village with him as the producer and labels wanted to take them on. Eventually, he stood out as the clear star and they wanted him as a solo artist. He also worked with a Tribe Called Quest and they helped him meet people in the industry to be successful. He went on to make his first album, Welcome 2 Detroit which was a good record. During all of this time, he lived a life of a celebrity, with lots of drugs, women, and etc. He was so devoted to working that if people got him distracted he would sometimes lash out at them. Eventually, he would join the Soulquarians, a group of artists making a collective and where he would meet D’Angelo, Common, Questlove, and Erykah Badu, incredible artists and people he worked with and produced for. He continued to make music and made collaborations with artists like Madlib who is another great producer to make projects such as Jaylib. He went to California to do this, and had more success there as well. Eventually, though, he started to feel sick. He checked in with a doctor and they said that he had a rare disease called lupus which can destroy your organs and can be fatal. He was hospitalized for lots of time but continued working on making music. He finished his project titled Donuts in 2006. After it was released, he died under a week later. Donuts was a revolutionary album for the way he chopped the beats and used a different time called Dilla time instead of Swing time or others. This made the album considered one of the best of all time. He has influenced many people and artists for decades and his reach has gone across many genres even outside of hiphop.