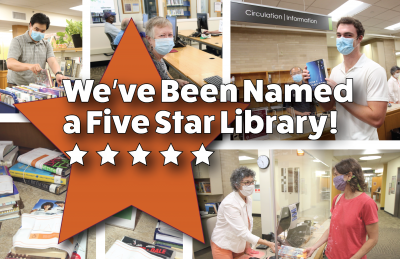 Wilmette Public Library has been recognized as one of the country’s Star Libraries in Library Journal’s annual statistical review of public library services. This is the Library’s third consecutive year being listed as a star library, and the second year in a row to receive the top distinction as a five-star library.

“Wilmette Public Library’s five star rating is a reflection of our community’s outstanding engagement with and support for our services,” said Anthony Auston, Director. “It’s an honor to receive this esteemed recognition of our services three years in a row.”

Each year Library Journal, the oldest and most respected library service publication, analyzes and indexes data from public libraries nationwide to recognize American public libraries and improve the pool of nationally collected library statistics. The Star Library index measures six key figures—per capita circulation of physical materials, number of visitors, e-circulation, public computer use, program attendance, and Wi-Fi sessions— to compare libraries within their peer groups nationally. Wilmette performed particularly well in several categories, with notably high performance in both print and e-circulation, where Wilmette has one of the highest rates in the nation with 6.04 circulations per capita. Wilmette also performed comparatively well in Wi-Fi sessions, with 35.37 per capita, and program attendance, with 1.26 per capita.

For more information about the ratings and Wilmette Public Library’s five-star status, read the full article from Library Journal