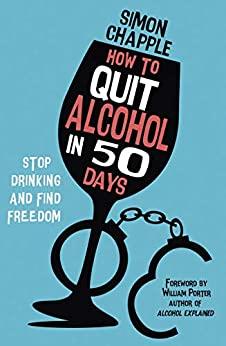 Been thinking about cutting down or stopping drinking? Curious about the history and concepts of not drinking? Want to make some fantastic alcohol free cocktails? Check out these library books!

How to Quit Alcohol in 50 Days: Stop Drinking and Find Freedom by Simon Chapple

"Simon Chapple is a Certified Alcohol Coach who has helped thousands of people change the way that alcohol features in their lives. In How to Quit Drinking in 50 Days he'll give you a structured way to find complete freedom from alcohol - for now, or forever. This 50-day journey to freedom is split into two parts. Days 1-25 will ask you to take an honest look at the impact alcohol has had on your life, to examine the reasons for your drinking, and will arm you with the best strategy for quitting alcohol successfully. Days 26-50 will ask you to make the commitment to taking a break from alcohol - taking each step with one chapter a day, and answering the questions that come up. There are strategies for dealing with challenges and setbacks, and a wealth of resources for finding support and inspiration. Above all, there is a genuine passion for the sober adventure, and the huge rewards of an alcohol-free life - a life of freedom that's waiting for you." -From the Publisher

"How to stop drinking, stay stopped, and develop emotional skills for a life of excitement and connection … without the hangover. “No thanks―I’m not drinking tonight.” In a culture that equates alcohol with enjoyment and social acceptance, making this simple statement can make us feel like we’re depriving or even punishing ourselves. “When we realize we don’t want to drink anymore or can no longer drink safely, it can feel like the only choices are to spiral out of control or embrace a joyless life,” says psychotherapist and sobriety expert Veronica Valli. “But it’s not true! Sobriety can be a path filled with fun, excitement, belonging, relaxation, and romance.” Soberful offers a practical and straightforward program on how to get sober and stay sober by increasing your self-worth, energy, and participation in life. Valli begins by debunking widespread beliefs about alcohol and sobriety, including the illusion that alcohol itself is the problem."

Quit Like a Woman: The Radical Choice to Not Drink in a Culture Obsessed with Alcohol by Holly Whitaker - Book | ebook | Downloadable Audiobook

"We live in a world obsessed with drinking. We drink at baby showers and work events, brunch and book club, graduations and funerals. Yet no one ever questions alcohol’s ubiquity—in fact, the only thing ever questioned is why someone doesn’t drink. It is a qualifier for belonging and if you don’t imbibe, you are considered an anomaly. As a society, we are obsessed with health and wellness, yet we uphold alcohol as some kind of magic elixir, though it is anything but. When Holly Whitaker decided to seek help after one too many benders, she embarked on a journey that led not only to her own sobriety, but revealed the insidious role alcohol plays in our society and in the lives of women in particular. What’s more, she could not ignore the ways that alcohol companies were targeting women, just as the tobacco industry had successfully done generations before. Fueled by her own emerging feminism, she also realized that the predominant systems of recovery are archaic, patriarchal, and ineffective for the unique needs of women and other historically oppressed people—who don’t need to lose their egos and surrender to a male concept of God, as the tenets of Alcoholics Anonymous state, but who need to cultivate a deeper understanding of their own identities and take control of their lives. When Holly found an alternate way out of her own addiction, she felt a calling to create a sober community with resources for anyone questioning their relationship with drinking, so that they might find their way as well. Her resultant feminine-centric recovery program focuses on getting at the root causes that lead people to overindulge and provides the tools necessary to break the cycle of addiction, showing us what is possible when we remove alcohol and destroy our belief system around it." -From the Publisher

Not Drinking Tonight: A Guide to Creating a Sober Life You Love by Amanda E. White LPC - Book | ebook

"In this honest discussion of mental health, the founder of Therapy for Women explores our reasons for drinking alcohol - and the benefits of taking a break. When “retired party girl” and popular therapist Amanda White admitted she was an alcoholic, it wasn’t because she’d done something outrageous while under the influence, like land herself in jail or get married in Vegas. It was because she realized three things: Alcohol was making her life worse. Moderation wasn’t helping. She could not be a therapist if she continued to use alcohol to numb her life. Something needed to change - not just her relationship with alcohol, but her relationship with herself. Choosing not to drink can be daunting. It’s everywhere in our culture, our socializing, and our destressing. And it can seem black or white: You drink or you don’t (and if you don’t, people ask why). That’s where Not Drinking Tonight comes in." -From the Publisher

Smashing the Liquor Machine: A Global History of Prohibition by Mark Lawrence Schrad

"When most people think of the prohibition era, they think of speakeasies, rum runners, and backwoods fundamentalists railing about the ills of strong drink. In other words, in the popular imagination, it is a peculiarly American history. Yet, as Mark Lawrence Schrad shows in Smashing the Liquor Machine, the conventional scholarship on prohibition is extremely misleading for a simple reason: American prohibition was just one piece of a global phenomenon. Schrad's pathbreaking history of prohibition looks at the anti-alcohol movement around the globe through the experiences of pro-temperance leaders like Vladimir Lenin, Leo Tolstoy, Thomás Masaryk, Kemal Atatürk, Mahatma Gandhi, and anti-colonial activists across Europe, Asia, Africa, and the Middle East. Schrad argues that temperance wasn't "American exceptionalism" at all, but rather one of the most broad-based and successful transnational social movements of the modern era. In fact, Schrad offers a fundamental re-appraisal of this colorful era to reveal that temperance forces frequently aligned with progressivism, social justice, liberal self-determination, democratic socialism, labor rights, women's rights, and indigenous rights. Placing the temperance movement in a deep global context, forces us to fundamentally rethink its role in opposing colonial exploitation throughout American history as well. Prohibitionism united Native American chiefs like Little Turtle and Black Hawk; African-American leaders Frederick Douglass, Ida Wells, and Booker T. Washington; suffragists Elizabeth Cady Stanton, Susan B. Anthony, and Frances Willard; progressives from William Lloyd Garrison to William Jennings Bryan; writers F.E.W. Harper and Upton Sinclair, and even American presidents from Thomas Jefferson and Abraham Lincoln to Theodore Roosevelt and Woodrow Wilson. Progressives rather than puritans, the global temperance movement advocated communal self-protection against the corrupt and predatory “liquor machine” that had become exceedingly rich off the misery and addictions of the poor around the world, from the slums of South Asia to the beerhalls of Central Europe to the Native American reservations of the United States. Unlike many traditional "dry" histories, Smashing the Liquor Machine gives voice to minority and subaltern figures who resisted the global liquor industry, and further highlights that the impulses that led to the temperance movement were far more progressive and variegated than American readers have been led to believe." -From the Publisher

Euphoric: Ditch Alcohol and Gain a Happier, More Confident You by Karolina Rzadkowolska

"Euphoric is your eight-week plan for an alcohol-free lifestyle that can lead to more happiness, well-being, and self-love. It's the modern woman's guide to relax without alcohol, find freedom from cravings and fitting in, and create the life you want - along with the audacity to go after it. Imagine a program that makes the benefits of "Dry January" last all year. That's Euphoric! Alcohol is everywhere in our society, and it's hard to resist. The pressures to fit in and have "just one drink"--that turns into several - whether at a party or on a casual Friday night, can lead to an imbalanced life that's plagued with unhealthy habits, low self-esteem, and decreased productivity. How can you change your relationship with alcohol without feeling deprived or like a social outcast? First, decide you want a change and then pick up Euphoric, from certified alcohol-free life coach Karolina Rzadkowolska." -From the Publisher

Sober Curious: The Blissful Sleep, Greater Focus, and Deep Connection Awaiting Us All on the Other Side of Alcohol by Ruby Warrington

"It’s the nagging question more and more of us are finding harder to ignore, whether we have a “problem” with alcohol or not. After all, we yoga. We green juice. We meditate. We self-care. And yet, come the end of a long work day, the start of a weekend, an awkward social situation, we drink. One glass of wine turns into two turns into a bottle. In the face of how we care for ourselves otherwise, it’s hard to avoid how alcohol really makes us feel… terrible. How different would our lives be if we stopped drinking on autopilot? If we stopped drinking altogether? Really different, it turns out. Really better. Frank, funny, and always judgment free, Sober Curious is a bold guide to choosing to live hangover-free, from Ruby Warrington, one of the leading voices of the new sobriety movement. Drawing on research, expert interviews, and personal narrative, Sober Curious is a radical take down of the myths that keep so many of us drinking. Inspiring, timely, and blame free, Sober Curious is both conversation starter and handbook—essential reading that empowers readers to transform their relationship with alcohol, so we can lead our most fulfilling lives." -From the Publisher

"90 spirit-free cocktail recipes from leading and lauded mixologists across the country. More than 100 years after Prohibition was enacted, bartenders are actually excited about people not drinking again. From Dry January and alcohol-free bars opening around the country to people interested in abstaining from drinking for better health, the no-proof movement is one of today's fastest-growing lifestyle choices, as consumers become more mindful and re-examine their relationship to alcohol. The no-proof drinker could be anyone, and even traditional bars have taken note with no-alcohol offerings. What do the world's most talented bartenders concoct when they can't use booze? This book answers that question with 90 lush and sophisticated recipes that take the craft to new heights. Veteran reporter Elva Ramirez interviewed the biggest names in cocktails and collected recipes for vibrant no-proof drinks from the world's top bars in Paris, London, and New York. This is the start of a new era in no-proof drinking." -From the Publisher

"In a culture where sipping "rosé all day" is seen as the epitome of relaxation, "grabbing a drink" the only way to network; and meeting at a bar the quintessential "first date," many of us are left wondering if drinking alcohol really is the only way to cultivate joy and connection in life. Jardine Libaire and Amanda Eyre Ward wanted to live spontaneous and luxurious lives, to escape the ordinary and enjoy the intoxicating. Their drinking, however, had started to numb them to the present moment instead of unlocking it. Ward was introduced to Libaire when she first got sober. As they became friends, the two women talked about how they yearned to create lives that were Technicolor, beautifully raw, connected, blissed out, and outside the lines . . . but how? In The Sober Lush, Libaire and Ward provide a road map for living a lush and sensual life without booze." -From the Publisher